Your Boma Away from Homa
Kafue National Park, Zambia 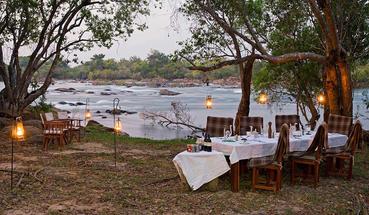 © Riverside dining at Lufupa Riverside Camp
The Great North Road leads us out of the capital, Lusaka, and past people selling Meyer's Parrots in tiny cages on the side of the road. Zambia has been ravaged by unchecked poaching and illegal wildlife trade over the years, but that seems to be changing.What its neighbour Zimbabwe has lost, Zambia has gained; its infamous roads are being rebuilt, the land farmed and the parks restocked with wildlife. Almost a quarter of Zambia's 752 614 square kilometres of deciduous savannah and isolated mountain ranges is devoted to National Parks. These have been much neglected over the years but that too seems set to change.

We are headed for Zambia's oldest and largest park. The 22 400 square kilometre Kafue National Park was proclaimed in 1950. The size of Wales, it is the second largest National Park in the world. A thousand metres above sea level, riparian forest and miombo woodland are interspersed with plains and wetlands watered by the Lunga, Lufupa and Kafue Rivers. The park remained undeveloped, however, until recently.

McBrides Camp is the newest addition to the scattering of tourist establishments that have defied logistics and set up camp in the far-flung corners of the Kafue. The camp is named for its resident lion researcher and his wife, Christopher and Charlotte McBride, who have lived in the African bush for most of their lives; from Timbavati to Savuti, Kwazulu Natal to the Kafue.

Driving unawares with our windows down into the Kafue National Park, we manage to collect a small swarm of tsetse fly whose painful attentions soon have the driver in paroxysms at the wheel, trying to avoid snapping an axle or splitting the sump, and being eaten alive while doing so. Or you could fly in to the nearby air strip.

We finally arrive at the lodge in the dying rays of the day. We are greeted by a kaftan-clad Charlotte with a handshake followed by sundry swattings, slappings and a spray-down with dettol and water, our hostess's tried-and-tested tsetse repellent. Fly-free, we sit back in folding chairs and share a welcome cup of tea while sizing up the hippo-infested Kafue River. No sooner have we sat down than we are given an earnest warning about wandering outside after dark.

The camp is built around existing hippo paths and at night, it belongs to the hippo. They wander through at will on their way to their midden and graze around the chalets in the dry season. To illustrate her point, Charlotte tells us of a guest who had stepped out for some night air to find a hippo bull spraying his verandah territorially. Apparently, there had been lion in camp the night before.

The chalets, living area and bar are constructed out of local wood and thatch and blend into the bush. From the river, even with trees laid bare by winter, the lodge is barely visible. The bar is built up around a lofty sausage tree, the thatched roof accommodates its trunk while its crimson flowers, relished by the bushbuck, drip from floral chandeliers. All the plumbing in the en-suite, open-air bathrooms is covered by bark. The thatched open-walled living area with its scattered reference books and crocheted couch covers create the feeling that you've stepped into someone's home.

Full board at McBrides means just that as we discovered at dinner. Pea soup was accompanied by mini-vetkoeks, a deep-fried South African dumpling served in a variety of different forms at McBrides. Chinese stir-fry with rice, green beans and cabbage salad followed hard on the soup bowls. Fruit salad brought up the rear. At Charlotte's insistence we polished off the white wine a previous guest had left and retired replete.

Our first night in camp is a quiet one given what has gone before. The moon is not yet up, and, in the open-air shower, the stars are bright between the branches. The hippos' grunts carry over the water. Paraffin lamps are the order of the day with no sputter of the generator to mute the sounds of the bush. Our sleep is undisturbed until morning and the hippos get rowdy. Big splashes sound close by as they haul themselves back into the water at dawn.

Out on the River

The double-decker thatched comfort of the Fish Eagle boat provides the perfect viewing platform for hippo. The river is low before the rains and their dark, swift shapes are clearly visible under the water as they flee the approach of the boat. Hippo can remain under water for 5 - 6 minutes at a time. Their distinctive four-toed spoor are webbed to aid swimming.

We drift downstream, fishing for yellow-bellied bream with more enthusiasm than success. 7 or 8 different bream species are to be found in the Kafue River including the wide-mouthed bream and squeaker. As we putter back up the river to camp, groups of the water-loving antelope, the puku straggle the water's edge in the midday sun. Hippoes graze on the banks in broad daylight. A Lappet-faced Vulture surveys the scene from far above us.

Game Walk in The Park

An early morning game walk gets underway after taking the Fish Eagle across the river to the far bank. Three Meyer's Parrots flutter overhead with a chirruping welcome. Over 400 species of birds have been recorded in the park, including Pel's Fishing Owl, Wattled Crane and the Purple-crested Lourie. A Bateleur Eagle swoops overhead, his pink talons and beak aiding identification. A lone Knob-billed Duck, who only lives up to his name in the breeding season, occupies the shrinking margins of the Hamerkop waterhole.

Fresh elephant spoor is spotted and 100 metres later, there they are. A quick glimpse of sunlit rump and sweep of ear, and we beat a hasty retreat. Fresh buffalo spoor fails to have the same outcome. They stay just ahead of us and out of sight. A termite mound has been taken over by hyaena. Scattered around the two entrances are the bleached bones of long-gone dinners.

For game watching, the best time to visit Zambia's Kafue National Park is from May through to October by which time the summer heat is back. The Zambian unit of currency is the kwacha which means sunrise. A new day seems to be unfolding for the central African country and McBrides Camp is just the place to view the dawn.Copyright © 2002 Laurianne Claase. All rights reserved. Reproduction in whole or in part without the permission of the author is prohibited.
South and East African Safaris
© 2019 Siyabona Africa (Pty)Ltd - Private Tours and Safari