© Rafting up the Cunene River. Namibia

This unforgiving land is home to only the hardiest of people, yet the inhabitants of Kaokoland are the most beautiful people in Sub-Saharan Africa.

Clad only in goatskins, the Himba are tall and proud and posses innate elegance. They adorn their bodies and hair and protect themselves from the sun with the rich red earth of Africa. It is mixed with animal fat and also represents wealth. Jewellery is an important addition to their clothing and is fashioned from leather, metal and shells.

You will only get to meet these fascinating people if you travel to the remote north west area of Kaokoland and Damaraland. This is far from any town or city and the best way to get there is by taking a short flight over untouched desert and experience both Damaraland and the Skeleton Coast. The alternative is a long, bumpy road.

Namibia is a land of great disparity and this area once again demonstrates these contrasts. It has inhospitable-looking stark plains and petrified forests, ancient valleys leading to rocky outcrops and mountainous peaks of the Brandberg Massive.

Stone Age rock art is a special feature at the Brandberg whose most famous painting is the 'White Lady'. She has caused a bit of a stir because researchers have decided that 'she' is actually a 'he'!  The Brandberg Mountain  smolders with deep purples and reds. Dominating the horizon is the brooding Brandberg Mountain who rises to the great height of 6,500 feet above sea level.

You would be forgiven for thinking that animals would be sparse in this region, with nothing much bigger than some rodents or small grazing antelopes. Elephants are probably the last things you would expect to see, but the rare Desert Elephant do exist here and roam around the more vegetated areas and dry riverbeds. As fodder is scarce in this arid place, Elephant's can often be seen pointing their trunks skywards to reach the very last leaf on a tree.

Black Rhino plus a number of Antelopes and even Cheetah and Lion are also occasionally seen here. However, you are most likely to encounter goats and cattle roaming around in search of food accompanied by their Damara herder. The Damara people have, to a large extent adopted western customs and lifestyle, unlike the Himba further north. Such arid yet fascinating places seem to have the ability to invoke great inner search in most of the visitors. This normally leads to a rebalance of priorities and a greater perspective on life.

The north of Namibia is sub-tropical with summer rains causing humidity. Temperatures range from 26°C (79°F) in the winter to 43°C (108°F) in the summer from December to March.

The first sign of rain is expected in the January, reaching a peak in March. Rainfall is variable and usually arrives as heavy late-afternoon thunderstorms. During these hot summer months you can expect daytime temperature to reach 35°C (95°F), particularly in the river valleys.

May to September are cooler and pleasant months averaging about 26°C (79°F) during the day. Nights can get cold and frosty in June, July and August. The best months in Damaraland are May to December. 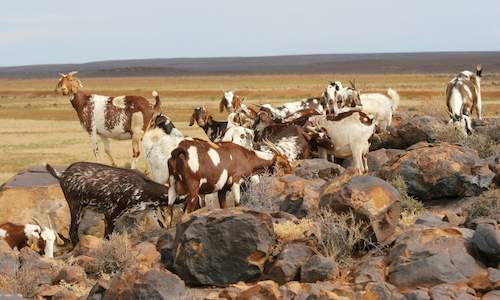 Kunene is located in the isolated northwest of Namibia. The dry mountainous landscape is served by the regular flow of Kunene River...more

The Cunene valley, the natural boundary between Angola and Namibia, is an extension of the south-central Africa Okavango-Chobe-Zambezi biome of rivers, swamps, riverine forest and woodlands.

Himba women traditionally apply a bright orange body paint called "otjize". This is a paste made from red ochre, which is used to coat the skin and protect it from the harsh sun.
South and East African Safaris
©2022 Siyabona Africa (Pty)Ltd - Private Tours and Safari