© Sun-downers on the river at Ntwala Island Game Lodge. Caprivi

The Caprivi is a strange strip of land in the north east of Namibia, created not by traditional tribal boundaries, but at the whim of colonial masters.

Rivers were often used as boundaries and the Zambezi and Chobe Rivers flowing through this area have five different Southern African countries along their banks. Namely Namibia, Angola, Botswana Zambia and Zimbabwe.

The Caprivi is Namibia's only area of high rainfall with summer floodwaters spilling over the riverbanks onto wide floodplains, while the central area stays quite dry. Humidity and insect activity is high from November to February, but the rest of the year is extremely pleasant.

Along the rivers, high-rise forests of Leadwood and Teak trees stand tall and proud and sprawling Sausage trees dangle their strange 'giant salami-like' fruit. Ghostly grey Baobabs contrast with colourful birds of which the pink and purple Carmine Bee-eater is perhaps the prettiest, while the African Fish Eagle is most definitely the grandest and Open-billed Stork the oddest. Add a whole range of animals on land and in water and it becomes obvious that the Caprivi is a fabulous place to go on safari.

The maximum daily temperature for much of the year is upwards of 30°C (86°F), with a cooler season from May to August.

The dry winter is pleasant (from May to August), with temperatures around 26-28°C (79-82°F) but quite cool in the early morning and late evening.

This is an area of summer rains with 80% of the annual 530mm falling between December and March. Humidity is up to 70% and it gets uncomfortably hot in January and February. 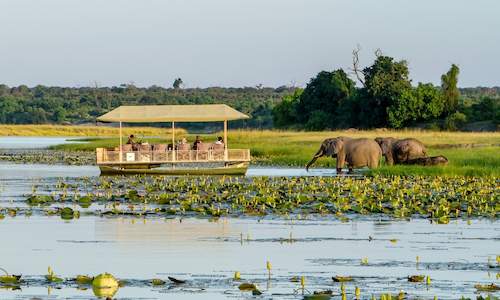 Caprivi is often referred to as the Caprivi Strip and is located in Namibia, east of the Okavango Region and northeast to the Zambezi River...more

The Kwando River forms a natural border between Namibia and Botswana but it confusingly changes its name several times in this region. Around the bend it becomes the Linyanti River and then later the Chobe River.

The water of the okavango delta is heavily stocked with fish. So it will come as no surprise that Eagle Island boasts the highest concentration of magnificent Fish Eagles on earth.
South and East African Safaris
©2022 Siyabona Africa (Pty)Ltd - Private Tours and Safari